Behind The Scenes Of The World's Most Complex Media Pitch

Good Pitch week 2014: To an assembled audience of marketers and agency leaders at the IPA, we shared the story of what has become known as the world's most complex media agency pitch: Novartis' global media review in 2011.

The Novartis session was hosted at the IPA offices in London as part ofGood Pitch Week, an excellent joint initiative by the IPA and ISBA and ID Comms were invited to share best practice in media pitches by co-presenting the Novartis case study.

What was unusual about this case study is that we presented it alongside both a senior client and the winning agency, so provided a fascinating three-way insight behind the scenes of how the pitch played out at the client, the competing agencies and also the managing consultant.

Representing Novartis was Sharon Spina,  VP Global Purchasing for Novartis Consumer division. Sharon was the most senior procurement executive involved on Novartis Media Council which is an excellent internal initiative committed to best practice in media management. Alongside Sharon was Matt Blackborn, President Emerging Markets at Starcom Mediavest Group who were the winning agency in the Novartis global pitch.

Why is the Novartis pitch considered the world's most complex media review?

For a start, Novartis is big. Its a $50bn+ a year turnover pharmaceutical conglomerate which is a complex corporation consisting of half a dozen other gigantic pharmaceutical companies. The different Novartis businesses are quite distinct culturally and operationally and few horizontal initiatives exist across multiple companies. They often act rather autonomously from each other, so asking them to co-ordinate on a global media pitch was a new experience and made possible largely by the existence of the Novartis Media Council which had been formed a year prior. The Media Council consists of marketing and procurement leaders from around the world representing all the main company divisions. Having their continued alignment and support was one of the primary success factors to this project.

Another complexity was the sheer scale of their business and complexity of media management. Novartis spend a reported $600m+ on media globally and whilst this isn't that grand compared to the large FMCG and auto makers, its still a giant prize for a single agency to manage. What makes Novartis different is that this money is spread over a huge geographic footprint. Novartis activate media planing and buying in 104 countries around the world. Naturally that requires a single media network to be two things; geographically broad but operationally brilliant. Starcom met their operational challenges head on and their consistency as a network became one of the determinants of their victory.

All this made for a pitch which asked a lot of everyone involved; the competing agencies, the client stakeholders and ID Comms as sole pitch management consultants had to be incredibly well organised.

There is always interest in pitch case studies and best practice examples, as we know pitching is a huge focus of agency energy and resources each year and the tension at play is a desire for increasingly accountable and objective pitches on the one hand but the desire to fast track and streamline the processes on the other. A recent excellent article inMarketing Week "Pitches Under The Spotlight" provided some constructive context for the Novartis case study session and includes an interview with ID Comms founder David Indo.

Pitches have certainly needed to become more complex as media agencies have become more complex and marketers demands of (and scope for) media agencies increases. So this puts more pressure on pitch processes to maintain integrity and produce a fair and transparent fight. We posted recently about How To Pitch (and Not Pitch) a Media Agencywhich followed a similar Novartis case study session to World Federation of Advertisers earlier in the year. Some of these same principles were also seen in a recent AdAge article noting an update to the well prepared pitch guidelines by the ANA and 4A's in the USA.

“The health of any client/agency relationship depends to a large extent on trust, clarity and respect between parties. With media pitches becoming increasingly competitive and complicated, it is to everyone’s advantage to ensure the foundations of their relationships are strong, right from the start.” 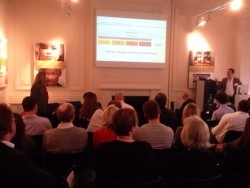 One of the highlights of The Good Pitch Week was the issuing of some new joint guidelines on this side of the pond. The 6 Principles were co-authored by IPA and ISBA and showcased during the week's events, youshould download a copy and keep them handy and also for good measure reference our own pitch best practice rules below. There's been aconsistently positive reaction from agency leaders, rightly so.

Thanks to IPA and ISBA for instigating the session, for inviting us to participate in The Good Pitch and especially thanks to Sharon Spina, who flew into London especially to present and fascinated the audience with her honest perspective of the pitch process from within the client organisation.