As reported today in both MediaWeek and on BrandRepublic, ID Comms is delighted to announce that John Billett, the founder of global media auditor Billett's International has joined ID Comms and bought a minority stake in the business

This comes as ID Comms announces plans to expand its consultancy business, taking on new consulting partners and building out its international network.

In 2014 we aim to open a new office in Latin America to add to our London and Singapore hubs, with aims to double the size of our client roster by the end of 2014. 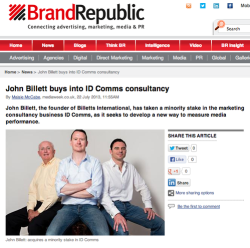 The company, which was set up by Tom Denford and David Indo in 2009, will work with John Billett as a new, exclusive consulting partner.

Billett has also invested in a 5% stake in the company, with the rest of the equity has been retained by Denford and Indo. The deal marks Billett’s first formal association with any media consulting company since he sold his stake in Billetts International to Ebiquity in 2008.

Key recruits such as Michael Smith, previously the Head of Digital at COI have helped build both its profile and its skill-set and the company has handled major media agency reviews for Novartis globally (£650m in 105 markets), Associated British Foods Plc (£21m in UK) and is currently working on the L’Oréal media agency pitch which is worth £135m and covers the UK & Ireland.

The arrival of John Billett, who effectively founded the discipline of media auditing, now gives ID Comms an unrivalled perspective on media performance measurement. He will help the company develop new ways to assess performance as traditional pool-based media benchmarking becomes less and less effective in the digital age.

Billett has been working informally with ID Comms for over a year, providing his expert advice and counsel on the next generation of media performance monitoring. This announcement formalizes that relationship.

“Using Billetts is still shorthand around the world for using a media auditor of any description. We believe John’s deep experience of dealing with the world’s leading advertisers and building a global consulting business will be invaluable for the future growth and success of ID Comms.”
Tom Denford

“Those who know John well will know he has an incredible drive, a restless and energy and a highly active and innovative mind. John is one of the most recognized names in global media and will be an incredible asset to ID Comms.”
David Indo

“I’ve been very impressed with the ID Comms people and operations. They have that rare combination of history and proven expertise with an innovative, creative approach to traditional media effectiveness issues in the rapidly changing media economy. I’m very excited to be joining the team.”
John Billett