However, we all tend to look at these things from a marketing point of view which, as points of view go, is rarely the most constructive or objective. These exciting new marketing tools weren’t created by agencies or brands, they were invented by coders but they now only emerge, grow and succeed because of their users. You probably know already, Twitter wouldn’t be half the tool it has become without its users actually inventing most of its functionality such as @reply, DM, hashtags, followfriday – none of this was from the clever Twitter techs – their users invented the functionality they wanted and arguably created most of Twitters considerable value, which by the way they’ll never see but that’s another story.

So, what we mean by ‘social media’ is a growing list of digital tools that have the functionality to connect people with others. It’s a tech world, not a marketing world. I think we need to be reminded often that real people don’t see the world like we marketing people see it – they see the technology, the platforms and the apps but they don’t see it as one professional discipline and they certainly don’t see it as a complex and confusing space. They hear about, they try, they share, they like, they stay or they move on.

So, why is social media such a conundrum to marketers?

The quick answer is social media is a challenge to most marketing professionals because they can’t pay for it, they can’t throw money at it and dominate it. At the same time, their agencies can’t figure out how to make money from it, so often client and agency stand together on the sidelines, scratching their heads and waiting for the carousel to stop so they can get on safely. I don’t think its going to stop to let you on. Sure, agencies are pouring money into Facebook, but that’s not a social media strategy, that’s an ad buy. Lets not confuse the two.

Anyway, I think the idea of there being a type of media which is called “social media” will soon become redundant. What we currently call “social media specialists” we think of as mildly-autistic techie people who were born after the Year One AZ (Anno Zuckerberg). But social media is not about technology, its about tools. You don’t have to be able to understand the algorithms to understand the social element to our digital lives. Social media doesn’t exist online, it exists everywhere and digital tools have only enhanced our capability to share ourselves, our thoughts and ideas with each other, quickly and globally.

Social media specialists will eventually be people who are simply experts and pattern finders in social interaction and social behaviour. These used to be called planners. These are the people we (and certainly ‘social’ businesses) will turn to when we want to understand how a brand can participate in social interactions. Both online and offline.

Soon, the idea that there is a separate discipline of social media (which remember is just a construct of the marketing industry, real people don’t see it this way) will die away as digital social functionality is added to everything we do. We do this already. Leaving a social trail through your life will become normality, leaving your unique digital fingerprints on everything, sharing your thoughts, locations and opinions as you move through the analogue world will become more and more common. Tools like FourSquare, Groupon, TripAdvisor,Stickybits, Yelp and Places mean that everything and anything that can be documented digitally and recorded and stored with people’s opinions and comments attached to. This allows us to move through a physical world enhanced by a digital overlay of information shared by people just like us. People that we trust more than we trust brands.

Then what role for brands?

If I can walk into a supermarket and use a augmented reality tool which recognizes brands as I walk the aisles and tells me instant reviews from people I trust, what role does traditional advertising play in informing my decision making? If I can be steered towards a brand I’ve never heard of by my digital tribe and easily eschew the established brands, what value loyalty? There has been some interesting debate in the US recently, with Wieden+Kennedy staking claim to incredible sales at OldSpice on the back on some smart (Cannes award winning) social media activity. AdAge meanwhile put much of Old Spice’s recent resurgence down to a smart coupon campaign and in-store promotions. But hey, giving credit to the sales promotions guys isn’t as sexy as applauding the “social media geniuses” on the Riviera is it? Shame.

The role for brands across these social tools is simple and you have two choices. As a brand you either create them yourself or if you don’t you will end up paying someone else to get access to their users. Either is valid, you can choose, there is only one difference. As Jon Bond (ex-KBB) said recently “Marketing in the future will be like sex, only losers will pay for it”. 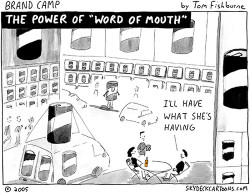 Here’s some food for thought though, while you make up your mind which approach to take.

Remember how we all used to talk about TV programme and adverts in the school playground? That never leaves us. People talk about brands because they are part of the cultural fabric of our lives. So how do these digital tools enhance that? We have to remember that media has always been social, adding digital tools just makes it easier to be social. Its happening.

TV viewing will become more interactive and technology is enabling shared viewing to take place but in different locations. Twitter is showing us this.

Print and books will be consumed more in digital formats and through social media functionality we will see what magazines and books our friends are reading and share articles to create unique magazines full of content just for us, created from sources we trust and like. See for example how tools like the brilliant Flipboard “a personalised, social magazine” on the iPad are showing us this.

Outdoor will become more digital and customised to the viewer based on their mobile proximity or their interaction and people will react to outdoor screens which are more frequently digital. Outdoor can dispense social currency and increasingly will be physical locations for connectivity with brands. Similarly, ambient outdoor media becomes interactive via augmented reality technology and bar code recognition (via stickybits) and photography becomes more social as geo-tagging enables photos to live in a space in the world to be discovered by others in that physical space.

Radio becomes more social as it becomes more web-based. Think of platforms like last fm and spotify as radio stations enhanced by social tools, with their very own social culture and recommendations and lists and playlists for every occasion.

Direct mail will soon become too inefficient to be worthwhile. It ceases to be precise enough and so offers and promotions will be delivered to us by our peer network, with people being incentivised to share promotions with others that would be relevant, for example by recruiting friends to unlock a discount. Networks of friends connected digitally will invent promotions themselves, demanding en masse from companies what they need to offer in order to sell in volume (see Groupon and recent Foursquare promotions by Gap and Amex).

So, instead of ‘social’ being a medium to get excited about, think more about how we can enhance media moments (i.e. consuming content) with social functionality, linking our media moments with those of others. How can your brand develop valuable tools and services for your customers which enhance their real life experiences, not just your brand.

I’m keen to hear your thoughts.

(By the way, check out more of Tom Fishburne’s ace ace work at Marketoonist)